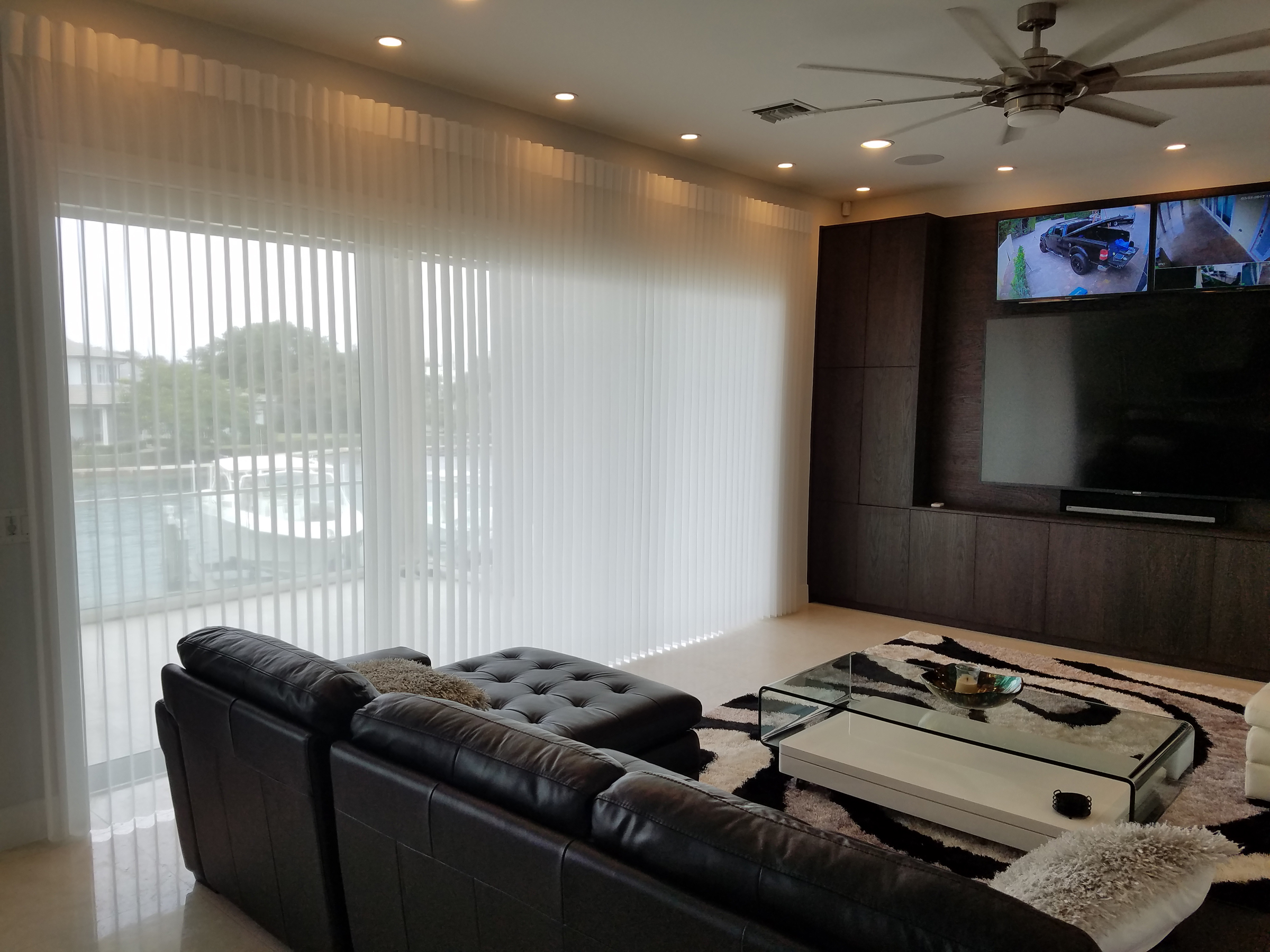 Contact. That’s it! Luminette Privacy Sheers by Hunter Douglas must hang freely, from the moment they’re installed to the end of time. Never coming into contact, and especially sustained contact with furniture, pets, other window treatments, or anything else. They should be regarded as delicate accessories.

Trouble often begins at the point of sale. In their haste to close a deal salespeople rarely educate consumers on a product’s limitations. For example, the fabric constituting Luminette’s vanes must be understood for the semi-rigid material it is. As such, it has a keen “memory.” Meaning that when bent, twisted, or otherwise misshapen it will at least to some degree retain that condition (see figure 1). The result is that misshapen vanes interfere with the smooth, uniform flow of Luminette’s sheer face fabric, thereby completely ruining its appearance.

Other problems can develop in the wake of a property sale. A woman we visited in 2014 inherited her Luminette Privacy Sheers from the home’s previous owner. One set covered the sliding glass pass-through to an outdoor kitchen and swimming area. Having noticed they were becoming sullied from heavy traffic, she called on us for a cleaning quote. I remember how sick I felt when I saw she’d tied them back to prevent further soiling – in the manner drapery panels are often tied back! I then had the unenviable task of informing her that they had been irreparably damaged.

The Floor Is For Furniture

Sure, for various reasons privacy sheers may need to be taken down at some point. Many residential high rises in hurricane prone areas have been retrofitted with impact resistant windows and doors in recent years. Clearly, anything near those openings had to be moved out of harm’s way. However, when it comes to Luminette Privacy Sheers there are only two ways to do it. The right way, and the deleterious way.

In figure 2 we see three Luminette Privacy Sheers with a combined worth of at least $2200. These were preexisting features when the resident bought the home one year earlier. Never having purchased high end privacy sheers, she understandably was not aware of what she had. Nor, evidently, was the contractor entrusted to renovate the home.

He ordered they be removed from their openings and carefully lain in an already finished upstairs room. Recognizing the complicated manner in which the fabric is attached to its carriers, the decision was made to remove all three units in their entirety. A bad situation was then made worse by laying them across one another. Even though there was enough floor space to keep them separated.

Several vanes sustained bends and creases as a result, forcing puckers across the face of all three when rehung. Again, the condition was irreversible.

Still more gut-wrenching images can be seen in the accompanying bisected photo (figure 3). In this case, no care at all had been exercised in removing three Luminette Privacy Sheers during a painting project. Interestingly, paint was found to have transferred onto two of them anyway! Such disregard by tradesmen is so common we’re thinking about making it the topic of a future article.

The One True Solution

Window coverings are meant to hang vertically at all times. That goes doubly for Luminette Privacy Sheers. Without exception they are permanently damaged when thrown across a bed, or on the floor.

Figure 4 shows a view of Luminette’s graceful folds, a characteristic made possible by the precise bonding of its sheer face fabric to its non-woven fabric vanes (behind the sheer). You may wish to click the photo in order to see more clearly how the sheer’s bottom edge flows.

To preserve this distinctive look when removed from an opening, a privacy sheer must be gradually released from its carriers even as it is being carefully rolled onto a cylindrical cardboard tube (figure 5). That’s how Luminette is shipped new from the factory, and that’s how it should always be stored when taken down. If it too must be removed, the SofTrak headrail (traverse rod) is typically placed inside the same tube.

Whatever you do, never permit anyone who is not intimately familiar with Luminette Privacy Sheers to remove them from their originally installed locations. If someone tells you they’ve done it before, request a detailed description of their method to be sure it agrees with the description above. Better still, call ADVANCED ON-SITE for guaranteed safe removal when preparing for renovation projects.