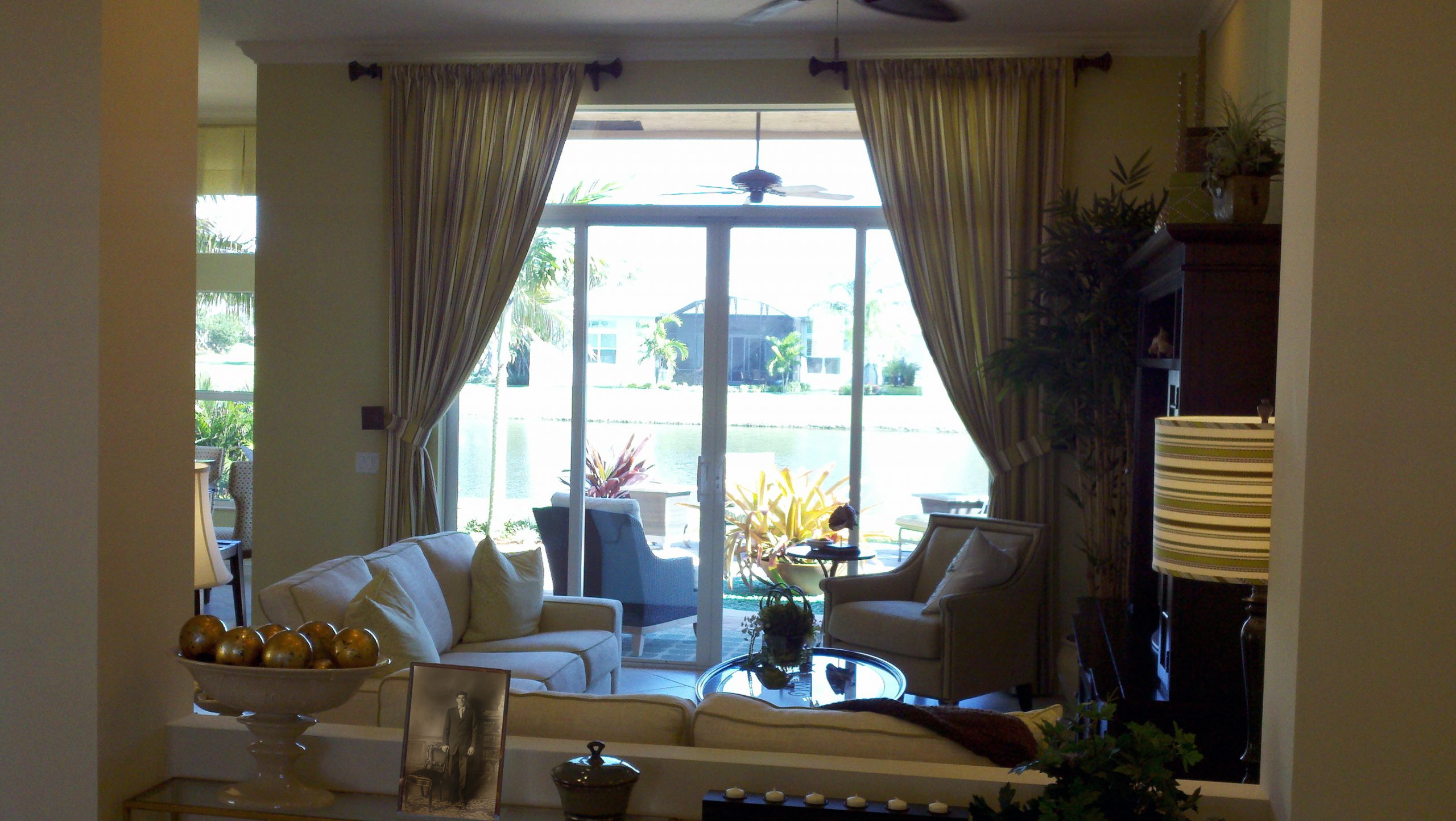 Interestingly, the mildew we see most often on fabric is not the dark gray, or black variety more common on other surfaces. It is in fact an orange-ish color, and usually manifests as circular colonies of one-eighth to one-half inch in diameter.

For an in-depth look at what can cause mildew on draperies click here.

Don’t Try it at Home

Removing mildew from drapes is best left to a professional. His, or her trained eye can identify each of the many different weaves and fabrics used. This is critical to determining which might react adversely to the cleaning agents and mechanical action necessary.

Synthetic sheers offer the best chance of complete removal, as they are easily cleaned using water and detergent. They can also withstand a great deal of mechanical action and the use of effective water-based agents such as peroxide and degreasers.

On the other hand, drapes made with natural fibers can become limp, and even shrink when water is present. Lined drapes such as those pictured nearly always contain at least some natural fibers. Use of a water-free solvent is therefore imperative. Unfortunately solvent based spot treatments are never as effective as their water-based counterparts against mildew. Or for that matter most any stain. But fear not.

A process known as the Dry/Wet/Dry Method has been perfected in recent years. It involves soaking the fabric with solvent to seal out moisture, attacking the surface with a commercial degreaser and appropriate mechanical action, then flushing again with solvent. After that, it’s kind of a “lather, rinse, repeat” scenario until all traces of mildew are gone. Or the technician determines that further mechanical action could damage the fabric.

When partially dried it gets a very light spray of industrial grade peroxide. But only if its color is closer to white than black. Peroxide has brightening characteristics that can produce uneven results on darker colors. Its effervescing characteristics are the key here, though.

Just consider how the peroxide in your medicine cabinet works when applied to a cut or scratch. Its bubbling action literally beats bacteria-containing contaminants out of the wound. Now, multiply the strength of that peroxide by 5 or 6 and you have an all-natural substance that’s so strong it’ll sting your fingers if you touch it! However on fabric it’s actually safer than bleach by a mile.

As the World Turns

I’ve gotten to the point on certain projects where I know the mildew is dead, yet its faded footprint is still visible. That’s when peroxide’s brightening and effervescing action becomes so important. It continues to work for as much as six hours after drying. On returning later, or occasionally the following day, I’m nearly always pleased.

Only twice have I observed little to no improvement following treatment. Even after reapplying peroxide, then checking back after the requisite amount of time. Don’t know why.

Alas, while the process renders mildew unable to proliferate, it seems we must stop just short of guaranteeing the elimination of all traces.