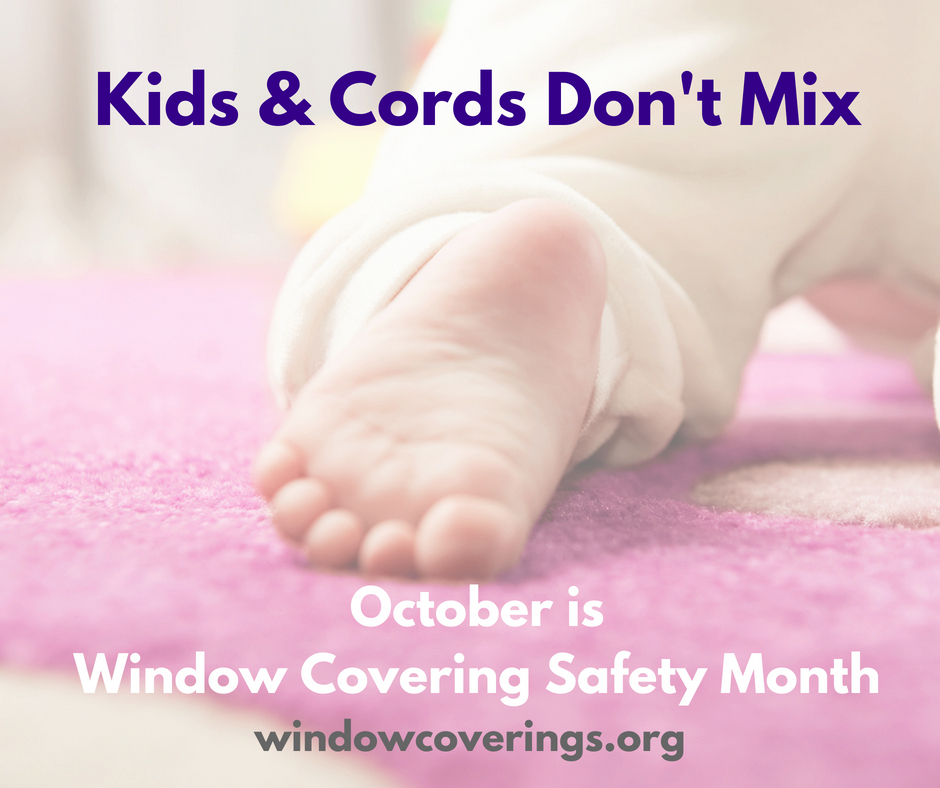 In 2012 the U.S. Consumer Product Safety Commission (CPSC) announced that during the previous sixteen years as many as 1,590 children were treated for injuries occurring as a result of entanglement in control cords. A consumer group, Parents for Window Blind Safety (PFWBS), documented 285 deaths and serious injuries over the same period. Little wonder that these cords have been listed as one of the CPSC’s top five “hidden hazards” in the home.

The Window Covering Manufacturer’s Association (WCMA) was quick to point out that over 80% of those cases involved older products that did not conform to current standards. Many had been installed and/or used improperly.

Indeed, the industry has implemented constructive changes over the years. Cord cleats, breakaway in-line components, and tensioners have helped curb the risk. As well, warnings about the danger of strangulation are attached to virtually every product entering the market. Still, there can be no question that child safety is the foremost issue confronting manufacturers.

Several groups, including Parents for Window Blind Safety, have petitioned the CPSC to mandate cordless window coverings. Methods include hand operated wands, cordless lifting systems, and motorization. All are typically more expensive and have advantages, as well as disadvantages.

The “wand” appeared in the 1980s as a method for traversing freely hanging treatments like drapes and vertical blinds. Initially touted as a way to reduce stress on wall and ceiling mounted components, it soon became evident that the absence of control cords eliminated strangulation hazards. Wands have been widely panned by consumers, primarily because they are difficult to conceal.

So-called cordless lifting mechanisms began to arrive in the late 1990s as a means to eliminate cords on horizontal treatments, like honeycomb shades and roman shades. They’re typically spring loaded and prone to a shorter lift expectancy. Proprietary components often require factory repairs, which can be quite expensive when shipping fees are taken into account.

Motorization is probably the most desirable option. But, while easiest to operate, it is also the most costly. And uncertain as to long term viability, due to the technology’s continually evolving nature. In order to incorporate new and improved designs, manufacturers end up re-tooling their motorized products every three to five years. This has the effect of rendering comprehensive lifetime warranties, prohibitive. Because honoring them would mean the continual manufacture of old parts from preceding generations. Some manufacturers offer to retrofit new technology. But, again, the associated cost can prompt one to question the advisability of this.

Be Aware of Implications

Through the use of kits and instructions made available on their website, the WCSC advocates modifying existing window coverings to make them safer. While these materials are offered out of genuine concern, we cannot recommend that you take such action. Especially on your own.

There’s a potential for inadvertent damage to the window covering itself. One of the modifications promoted by WCSC involves cutting control cords for the purpose of eliminating loops that might encircle a child’s throat. On the face it seems like a simple matter, especially with a lofty goal like child safety in mind. However, unless you’re a professional it can be all too easy to misunderstand just how this may affect the product’s functionality.

As with any other home furnishing, window coverings are an important investment. When you’ve paid good money for a custom treatment, there’s a tendency to be very upset when it suddenly becomes an expensive piece of junk. Additionally, even if it continues to function properly, modifications void warranties. Aftermarket alterations are nearly always considered “damage” by manufacturers.

Consider this: According to the Centers for Disease Control and Prevention (CDC), the leading cause of death among American children 5 and under is drowning. The most common location? The family swimming pool, by far. To prevent such occurrences the CDC makes several recommendations, including enhanced supervision and safety fencing to block off the area. There is no mention of re-engineering the pool itself. Or, heaven forbid, eliminating the water!

This serves to illustrate how misguided it may be for us to expect window covering control cords to completely disappear from our homes. They exist. It is therefore incumbent on all of us to keep children away from them. Just as they must be kept away from hot surfaces, electrical outlets, top-heavy furniture, items that should not be swallowed…and the list goes on. Parenting is very much like an extreme sport. Continual focus, and an ability to react instantly are prerequisites.

If you wish to reduce the challenge your existing window treatments pose to child safety, please be sure to enlist the services of a professional. ADVANCED ON-SITE is qualified to execute such modifications.