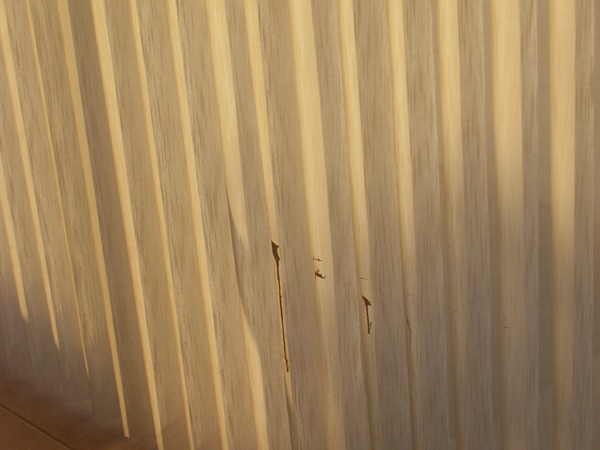 Oh No! That Stain’s Gotta Go!

Your grandson marks up the upholstery of a beloved chair with crayons. The family dog returns from a scrap with your neighbor’s cat and spatters blood all over a white, sheer drape as he shakes himself in front of it. You’re confounded by the appearance of mildew on a fabric window shade, with no apparent source of moisture nearby.

These are all actual scenarios described to ADVANCED ON-SITE by individuals seeking removal of notoriously difficult substances. Truthfully, while all WERE removed, and the overall success rate exceeds 95%, elimination of all traces of a substance can never be guaranteed. Primarily because there’s no way to know for certain that previous attempts to remove it have not already been made.

First, Stop and Think About the Risk

Consider the fact that a stain can be permanently “set” if the wrong method is used to remove it.

Any substance with the potential to gain a foothold in textile is going to have a protein, oil, or tannin base. Some substances actually contain elements of more than one base. In such cases the correct spotting agents must be applied in a very specific sequence, often repeating each more than once, before moving to the next. These sensitive operations are best left to a professional.

Even then, certain factors reduce how aggressively a stain can be attacked. Including fabric type and weave. More on that in a minute.

Rarely does a stain just dissolve away with the simple application of a spotting agent. Anyone who does their own laundry knows, more often than not mechanical action is necessary.

While the agitation that occurs in a washing machine is a form of mechanical action, it is less effective than other, more direct means. For example, washboards used from colonial times right up, and into, the 20th Century. Then there’s the ancient method of beating clothes on rocks. On the other hand, a simple fingernail can sometimes coax particulates from the fibers of a garment, or other household fabric.

Scrubbing a stained area against a non-stained area of the material is also effective. Commonly available stain removing formulas are usually applied, allowed to “dwell,” then reapplied for this purpose. The key is knowing how much mechanical action can be brought to bear before the material sustains damage. Too much, and “abrading” will occur.

Abrading is something we’ve all seen. Think of a rope rubbing against a rock or a tree. The first sign of damage will be a fraying appearance at the point of contact, indicating that small fibers have been severed and lifted from the main body.

Natural fibers are quicker to abrade than synthetics. But, all will eventually show signs of wear. Even before abrading occurs, the trajectory of individual threads can be disrupted in coarse or loosely woven fabrics, thereby making them appear twisted and uneven.

By now you’ve likely concluded that stain removal can be a tricky business. And you’d be right. In addition to everything else, when a stain is treated without, first, cleaning the entire chair, drape or shade, it ends up looking like just that – a stain treatment. In other words, it appears obvious that you’ve cleaned the stain and the area around it, while the rest of the item retains dust and other pollutants that have accumulated over time.

When a stain must be removed from an expensive window treatment, what you need is a company that guarantees against damage. ADVANCED ON-SITE is that company.